It will all be over this time next week. It being the campaign. The local people of Dublin and across the country will have made their choice of who they want to represent them. Obviously I’m hoping I will their choice.

I was selected to run in the local elections on 6th February, some 14 weeks ago. Since then I’ve been introducing myself to local residents, listening to them and supporting them with their concerns. These concerns are many and varied. Different people have different perspectives and expectations. They take differing views on what lies within their responsibility and what lies within state and local government responsibility.

One of the differences I have seen between areas is the existence or non-existence of good local residents’ committees. Such committee can really make a difference to a community. They bring people together to work to improve and advocate for their communities. They empower communities.

At an individual level, I’ve seen how the lack of information or rather having mis-information generated by media frenzies about issues causes real concern.  The water charges is one such example. Details were blurred in the long running saga – I’ve lost count of the number of OAPs who did not know that there is a reduction in the charge for their age group. 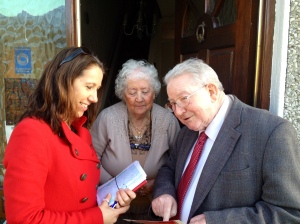 Many talk about people power but generally mean getting out on the streets and protesting against something. To me people power is having the relevant information to make decisions, to know how to go about resolving your concerns, to know how to get things done. I want to support people in having that power. That is why over the last 3 weeks I’ve been asking them to give me their Number 1 vote next Friday 23rd May. Being elected next week will enable me to enable others